* In case of any delay in receiving the OTP, you may verify it later. Please proceed without verification.

Your mobile number is not registered with us. Please register your mobile no.

The lovers of wildlife animals can’t literally miss out a visit to Bhimbandh Wildlife Sanctuary during a trip to Munger which maintains distinct identity. This wildlife sanctuary is famous in the district of Munger and has attained popularity at the national level. There is an interesting story behind the naming of this wildlife sanctuary. According to folk talesthe sanctuary derved its name from one of the Pandavas, Bhima from the epic Mahabharat who took initiative to construct the dam (bandh) at this place and so it came to be known as Bhimbandh. It remains one of the famous wildlife sanctuaries today.

Bhimbandh Wildlife Sanctuary
Of greater value and attraction are the wild animal tigers, panthers, wild boars, sloth bear, sambar deer, chitals, four-horned antelope and nilgais that keep Bhimbandh Wildlife Sanctuary into limelight. It should be noted that this sanctuary remains famous in the region for bird life instead of land animals hence it always welcomes the bird lovers. Being home to one of those more than 100 species of resident birds that stay either inside or nearby this sanctuary with ample increase in the number of birds on specific seasons, this sanctuary is a place to explore for variety of birds.


How to Plan Your Trip to Bhimbandh Wildlife Sanctuary?

Being an important location in the city of Munger, Bhimbandh Wildlife Sanctuary visitors must plan their visits well in advance. As the sanctuary is located at a distance of 56 km from the southern border of the city of Munger it is important to either arrange own vehicle for local transportation or approach the locals for transportation purpose. The distance between this sanctuary and Jamui Railway Station is mere 20 km and nearest Patna Airport is located at 200 km. You are charged nominally for the local distances. There is possibility for inflated charges hence make sure you bargain and research about local transport and accommodation well in advance.


Major Attractions of the Park 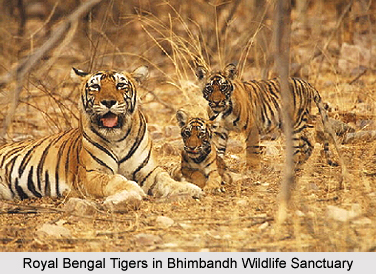 Located in the southwestern part of the Munger district of Bihar, Bhimbandh Wildlife Sanctuary seeks the attention of visitors to explore its huge tract of 681.99 km² forest cover area. Wonderful attraction of this park is the hillside especially Kharagpur Hills tract that make it beautiful place to explore. Several notable places are there in and around this sanctuary that always seek the attention of tourists and visitors flocking here. The famous locations in this sanctuary are Rishi Kund, Sita Kund, Ha-Ha Punch Kumari, Kharagpur Lake and Rameshwar Kund amongst others that are worth visiting here.The major and minor attractions of Bhimbandh Wildlife Sanctuary are worth exploring for the visitors.

Amongst the bird species inside Bhimbandh Wildlife Sanctuary famous ones are peafowls; grey partridges; quails; malabars; pied hornbills; swallows; nightjars; dronges; paradiseflies; kingfishers; bulbuls; mainas; pigeons; wood pigeons; blue jays; owls; falcons; kites; eastern imperial eagles; greater spotted eagles; white-tailed eagles; Pallas's fish eagles; grey-headed fish eagles; lesser kestrels and vultures are the notable ones. Other birds that can also be witnessed in the sanctuary are lesser white-fronted gooses; ferruginous ducks; Baer's pochard ducks; lesser adjutants & greater adjutants; black-necked storks and Asian openbill stork et al that can be witnessed here during the wintertime upon their migration from the Central Asian countries. If we talk of the flora in and around Bhimbandh Wildlife Sanctuary we come across to many things that are truly notable ones. Two biomes in Bhimbandh are great with forest and grasslands. Most portions of the sanctuary are covered by sal forest forestry area besides bamboo forests; grasslands and several smaller forest species make its flora truly appealing.

How to Reach Bhimbandh Wildlife Sanctuary ?

Several easy transportation options are available to reach the Bhimbandh Wildlife Sanctuary. If travelling by road then the roadways from Munger town connects you to this famous place. Use local transportation from the Bhagalpur Junction Railway Station to reach here by road. Nearest road link is NH 80 and other best railways connectivity is Bariarpur station on Jamalpur Bhagalpur section to link visitors to this place through the railways. Roadways link it with Bariarpur - Kharagpur - Gangta - Bhimbandh – Jamui cities.


Explore more about About Munger